Our organisation and history

1965 First meeting of the Sheffield Churches Committee for Community care, the original name of the organisation.

1966 The Committee established a small office at 19 Division Street; first volunteer preparation course for Community Care Volunteers who were to be used alongside statutory workers in the health and social services in a community setting.

1976 "Concern", the newsletter, started as a bi-monthly information sheet.

1978 Royal Hallamshire Hospital opens and the "Going Home-Link", now known as Hospital After Care, is in use over three wards for people over 60 years of age. With joint financial support from Sheffield City Council and the District Health Authority a co-ordinator is appointed whose role was to find volunteers to help when a patient is discharged from hospital, particularly if they are still unwell, or frail and live alone.

1981 "Home Care Relief" pilot scheme was established; to help the families of some elderly confused patients at the Northern General Hospital.

1982 Age Concern took over the Home Care Relief scheme with a view to expanding it. The newsletter "Concern" changed its name to "Caring".

1987 Development of Hospital After Care Scheme at the Northern General Hospital.

1991 25th Anniversary of Sheffield Churches Council for Community Care. The Bereavement Support Service was set up at the Northern General Hospital and the Royal Hallamshire Hospital.

1993 The organisation's constitution was amended. The Accident & Emergency Out of Hours Scheme is piloted.

1994 The organisation moves to 8 Backfields. The EscortCare Scheme is devised.

1997 SCCCC is involved in developing the Hospital Assessment and Integrated Care Scheme.

2008 Care in LBJ and Care in GV funding comes to an end, work is transferred to local projects. Development of Stocksbridge Community Care Group begins.

2015 The Placement Support Scheme is established, offering assistance to carers and families when choosing a care home.

2016 The 50th Anniversary of Sheffield Churches Council for Community Care.

2016 Received a Thank You Award from Sheffield Teaching Hospitals for Volunteering.

2017 Launched the Hospital to Home Scheme. Supporting older people who are being discharged from hospital.

2018 Received the Together for Sheffield - Faith Action Audit Award for outstanding contribution to your community.

2018 Became the Sheffield Chamber of Commerce Charity of the Year.

2020 Suspended the Good Neighbour Scheme for the first time in 54 years due to Covid 19 and the Global Pandemic.

2020 Launched the Penpal Scheme where volunteers and the public were invited to write letters, send cards and drawings to isolated older people to keep them connected throughout the Pandemic.

2020 Increased  the number of volunteers on the Telephone Support Service to help support isolated older people during the Pandemic.

2020  Received Royal recognition from HRH The Countess of Wessex as we are nominated as UK Business Heroes as part of The British Chamber of Commerce campaign.

2021 Launched the Volunteer Recruitment campaign to increase number on the Telephone Support Service in conjunction with BBC Radio Sheffield.

Today SCCCC can offer a network of services that supplement the wide range of health and social care resources in the city. Our aim remains the same - we work with our partners in the churches, the statutory sector and the community to support and improve the well being of older people in Sheffield. 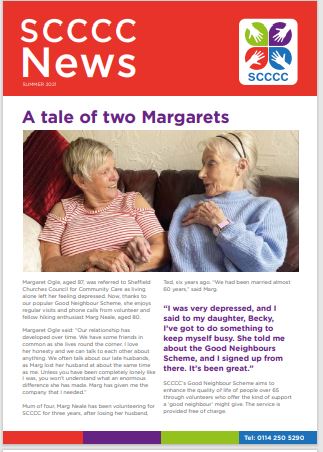