Sheffield students’ charity pen pal cards bring joy to older people at ChristmasYoung people have pulled together as part of a mammoth mission to give older people in Sheffield something to smile about this Christmas.

Students at Sheffield College wrote then hand-delivered almost 100 Christmas cards and letters for a Sheffield Churches Council for Community Care (SCCCC) pen pal scheme which aims to curb loneliness amongst over 60s.  The ‘A Card for Christmas’ project also saw the college-goers include a festive sweet treat with their greetings, whilst some helped to catalogue and distribute donations made as part of SCCCC’s reserve advent calendar initiative.

Ben Webster, Pen pal Coordinator at SCCCC, said: “It’s hard to put into words the difference the simple act of opening a kind-hearted card or a letter from a stranger can have on the life of an isolated, older person who might not have had any human contact in days. We’re so grateful for each and every one of the cards these brilliant young people have created, which will bring so much joy at what can be an incredibly lonely time of year for so many.”

Sheffield College tutor Dave Giblin, said: “We’re always looking for ways for our students to make a difference to their community and this felt like a simple, achievable task they could all get involved in. The young people who contributed to this work should feel proud of their work and know that they have made a tangible difference to the lives of older people in their city.”

The project formed part of Sheffield College’s ‘Steps To Success’ programme and involved students from across the college’s Hillsborough and City campuses.

If anyone would like to write to an older person via SCCCC, they can be sent to Pen Pal Scheme, SCCCC, Unit 19 President Buildings, Savile Street East, S4 7UQ, where they will be forwarded on appropriately. Photo caption: Photo: left to right: Lee Patrick, Melissa Barker, Dave Giblin, Ellie-Mae Fenwick, Dan White and Edward Pedin 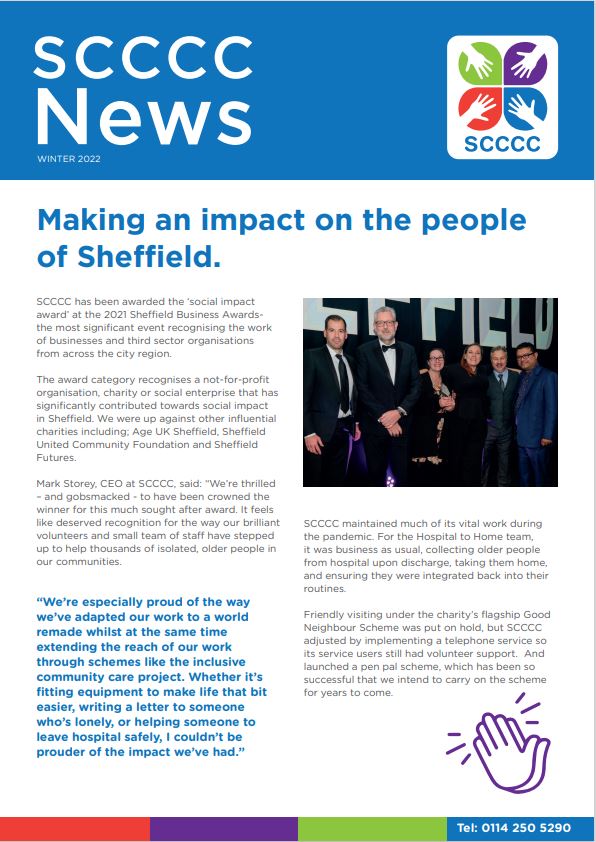